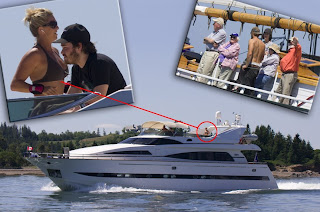 Ken and I were heading out to Swans Island to pick up the 17' Montauk so he could shoot the Atlantic Regatta over in Blue Hill. This mega yacht comes along with this woman doing a workout on the deck with ipod on and clearly some added hardware... meanwhile a bunch of schooner people are going the other way checking out the whole scene. Now there's some "contrast" for you... hmm... who looks like they are having more fun?
Posted by Unknown at 7:47 PM

Explore The Outdoors 30-60% Off North Face and More!

Promote Your Page Too