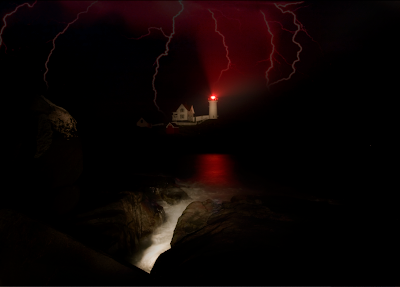 I find photography is really a combination of many skills which is fun. This photo came about totally unplanned since I was driving back from Newport and hit a bunch of lightning coming into Maine. I thought to myself where can I quickly drive to (it was already like 11pm) and shoot something with lightning behind. {skill #1 gadget freak skills} I stopped and pulled up the POI memory on the GPS in the 4 Runner and realized Nubble light was only 7 miles away... so I just hit "guide" and away I went. The roads were practically flooded so I tested out the 4 runner's water fjording capability on route {skill #2 offroad driving skills}. When I got there I pulled in and somehow dug out my tripod and set up a shot. The camera was getting soaked so I backed in and flipped up the hatch for some protection {skill #3: creative use of available assets} ... the problem was I only getting the lighthouse clear when people would drive in with their headlights, so finally I got this guy in a mini cooper to shine his lights on the lighthouse for me {skill #4: being able to talk people into helping you out} ... still not a lot of luck but I was getting the time of the exposure I liked on the red light of the lighthouse itself... then I really started to get on track when I found my portable high intensity spotlight and starting "painting" the lighthouse with it during 30 second exposures {skill #5: carry all possible items at all times and know how they all work} . Luckily I also had this portable power battery I got at Wal Mart that is supposed to jump start your car or boat, but also has a cigarette lighter... so I could walk around and light things from different angles and trigger it on and off during the exposures. I think I took over 35 30 second exposures or something before I thought I had my "base" material {skill #6: understanding digital photograhy and the 40D's functions to produce sharp images at night} ... the final process involved layering the images in photoshop and basically taking what I needed out of each image to create a final piece {skill #7: knowing how to post process images creatively in photoshop} , I'm not sure the name for this but it's a few of the photoshop books I've read at Borders in Annapolis... yeah I'm still too cheap to buy them... is that skill number eight? Click the image to enlarge and don't steal it please except for your personal wallpaper... the great thing about this kind of photo is people actually think you were genius enough to walk up at the right time and just shoot a photo that came out like this, and that's the way we professionals like it cause they'll never get anything close to this with that kind of thinking, and neither will we!
Posted by Unknown at 8:47 AM

Explore The Outdoors 30-60% Off North Face and More!

Promote Your Page Too